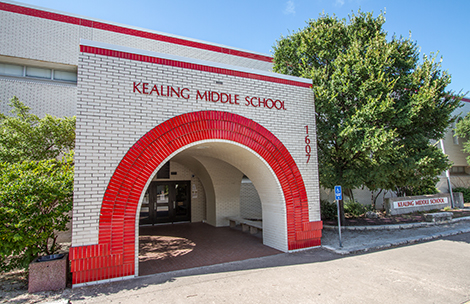 You can make a difference

Donate Now
Moving? Learn how to transfer within your child's school boundaries.

Named for Hightower Theodore Kealing, an African-American educator, writer, editor and activist in Austin in the 19th century, Kealing Middle School opened in the fall of 1930 as the first junior high school for African-American students in Austin. In 1971, the school was closed as part of Austin’s desegregation efforts. In 1986, the school reopened as a junior high school, both for students in the Kealing neighborhood and for students throughout AISD who were accepted into its rigorous and innovative academic magnet math and science program. In 1993, the magnet program expanded to include a focus on the liberal arts as well. In the fall of 2004, Kealing opened its sixth grade program and became a middle school. The Kealing Magnet Program has a reputation for excellence in academics, offering the most challenging and advanced core curricula in the district for English, math, science and social studies. The Kealing Academy Program serves students in sixth through eighth grades, teaching a rigorous and engaging curriculum to support the needs of students with a wide range of abilities. Academic strength is evident with the success of Kealing’s Advancement Via Individual Determination.

This feeder pattern represents the path students take as they advance to high school. Each child's exact path is determined by his or her home address. To find out where your child will attend, click on the school finder below the feeder pattern.

Find out where your child will attend school based on your address.

In recognition of the disruption caused by the COVID-19 emergency, TEA labeled all campuses Not Rated: Declared State of Disaster for the 2019-20 school year.