Earlier this year, the Bailey Middle School Robotics Team won the three most prestigious VEX awards possible. They won Tournament Champions, 1st in Robot Skills, and the Excellence Award! The Excellence Award is the highest award presented in the VEX Robotics programs.

The recipient of this award is the team that exemplifies overall excellence, and is a shining example of dedication, devotion, hard work, and teamwork. This recent win qualified the Bailey Robotics Team for a Tournament of Champions at Google Headquarters in California on Feb. 17.

Out of 76 Middle School Teams from throughout the United States, Bailey placed 3rd in the Qualifying Round. The Bailey Bears won 5 out of 6 matches, and scored the most autonomous points in their group to secure their position. The Autonomous portion of the contest where the robot runs by program only. "Our robotics student are doing an amazing job, said Principal John Rocha. “Their success over the last three years has been way beyond anyone's expectations. I can't wait to see what they accomplish this year."

The Robotics Team at Bailey Middle School is one of the fastest growing programs in the state and has distinguished itself by winning the Tournament Finalist trophy at the State Finals last year. In addition, this season Bailey has qualified eight teams to compete at the state level, and three of Bailey's teams have qualified for the U.S. Open in Iowa held April 4-7 where they will compete with 160 of the best teams in the world.

The U.S. Open Tournament always hosts a large number of teams from China and is one of the most competitive tournaments in the Robotics World.

Their Robotics Coach Arthur Thompson commented, "It is amazing watching how Robotics increases the student's love of learning in the STEM field (Science, Technology Engineering and Mathematics). Before I know it, each group is coding, designing, and building systems that far surpass all expectations." 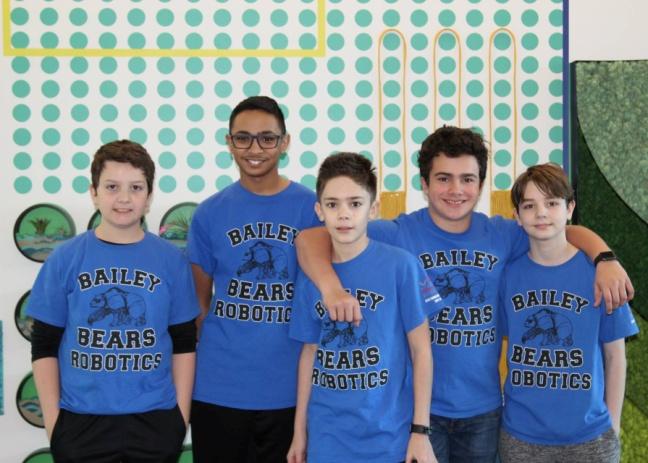