When the final whistle blew at the class 6A state wrestling tournament on Saturday, Bowie sophomore Olivia Moreno knew that she had just accomplished something no one else has done before, becoming Bowie's first-ever female state wrestling champion while maintaining an undefeated season at 23-0.

Moreno took home the 119-pound weight title in the class 6A state wrestling tournament Saturday at the Berry Center in Cypress, Texas. She could not hold her excitement, completing a full backflip in celebration after she pinned her final opponent.

"At first, it was surreal, and then a rush of adrenaline hit me," Olivia said. "I was kind of in shock at one point, and then I realized, this is what I have been working so hard for all season. I would have been disappointed with anything less."

Olivia's coach says her drive to be the best is what stood out this season.

"Olivia's drive to be the best and the fact that she was never afraid of competition is what stood out to me the most," said Head Coach Brittany Moreno. "She knew that in order to be the best, she had to beat the best, and there was never a doubt in her mind that she wouldn't accomplish that goal. "

She took less than six minutes to pin each of her quarterfinal and semifinal opponents before facing off against another undefeated wrestler, Lily Broadrick of Tompkins High School. Moreno overpowered Broadrick, pinning her in the first period to win the state title.

"Olivia Moreno is a shining example of Pride in Performance at James Bowie High School," Robinson said. "A state title is the pinnacle of every competitive sport or extracurricular program, but an undefeated season in wrestling is especially rare. She has shown everyone in Bulldog Nation what work ethic and commitment to success can achieve."

Olivia, who is only a second-year wrestler as a sophomore, works just as hard on the mat as she does in the classroom.

"She has a great attitude because she makes hard work fun," said Robinson. She is a strong student academically, equally concerned about her grades as she is about her record on the mats. She continues to grow as a student because no matter what she is doing, she is going to do it well and make it fun."

Olivia celebrated her accomplishment with her classmates at Bowie in a morning video announcement. Her classmates expressed their excitement by sending emojis to communicate how proud they were to hear about Olivia dominating at the highest level.

Moreno also plays softball, and after a double in the most recent game, she was cheered on by the student body with chants of "state champ, state champ!"

"I love wrestling, I am super competitive, and I made history with this win," said Moreno. "I was the first female in my school and at my club to win the Championship, and that is something I will always be proud of."

Olivia is not the only Moreno in her family with a winning record in wrestling. Her cousin and club wrestling partner Gianna Moreno, a senior at San Marcos, went undefeated this season 18-0 and won the state championship for the 138-pound weight class. 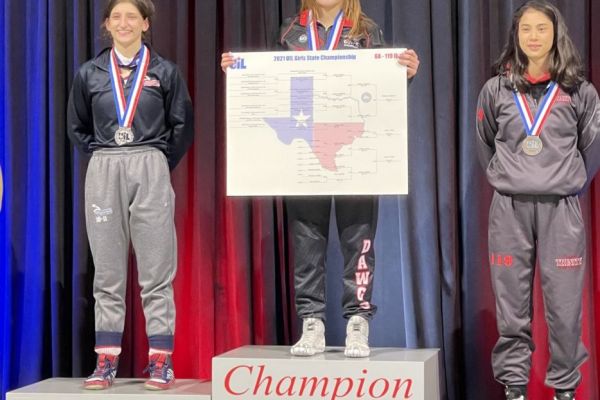 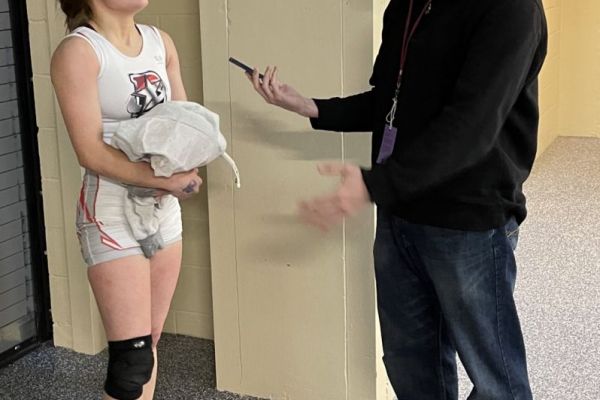